Thank you to all those that joined in the fun at the HRC Christmas Party…and of course, special thanks to our toffee cake bakers!

The evening was a great success with ( despite all being provided with the same recipe and ingredients list!) a wide range of cakes ( in appearance and taste) from which our ‘Bake off’ judges had to select their winner. 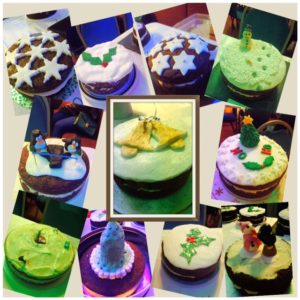 Our very own Mary Berry ( Ros Clayton) and Paul Hollywood ( Dave Burton) having no idea whose cake was whose, carefully tasted and analysed each cake’s texture, taste and ‘bake’.

The ‘wooden spoon’ was awarded to a cake which needed rather longer in the oven and which was creatively iced with Santa’s ‘sleigh crash’…baked by Jon Strong and Gordon Landsburgh.

The winning cake was baked by the youngest baker in the competition …proving he can not only run quite fast but can bake a ‘mean’ toffee cake……….Ben Masser! Ben was presented by our judges with a golden rolling pin!

Cakes were then sold off by the slice with all proceeds being donated to ‘Rainbows’.

Next year’s event has already been booked for Saturday December 19th so get baking!