Skip to content
Hinckley Running Club held their annual presentation evening at The Atkins Building on Saturday night with many club members being recognised for their 2014 achievements.

The evening began with the Junior Division Athletics Awards after a successful season of athletics inside/on the track and also in cross country (XC). As a result of their successful season, 11 club members will be representing Leicestershire in the Regional Sports Hall Finals in February.

Most Improved Athlete went to Elise Cook-Sutton for improving in every field event that she competed in at Saffron Lane along with making a clear improvement in her long distance running. The Spirit of Athletics Awards went to Bethan Padbury for her time spent being an Assistant Coach at training sessions, assisting the younger children in competitions and being an ambassador herself by competing in both the junior athletics division and senior XC events. 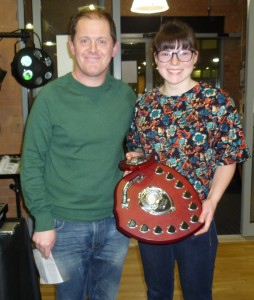 Ben Thomas scooped Male Athlete of the Year for his success in track competitions and XC races. Female Athlete of the Year was awarded to Emily Buckler for her track and XC successes and for setting 6 club records this season. Both athletes have regularly represented their schools throughout the season. Senior Club Chairman John Padbury then presented the Senior Division Chairman’s Award to Jayne Thomas for her outstanding contributions to the Junior Division. Despite the many hours Jayne dedicates to the Junior division, she also manages to attend club training herself on a regular basis.

The Senior Awards night began with the preceding title holder Jacqui Campbell awarding Celine Guery with Beginner of the Year for her outstanding progress since joining Jacqui’s beginners group and the running club. Club president Geoff Oliver then went on to present the President’s Shield Awards which include a free 2015 membership to the club for the winners. The awards are based on a points system for individuals performance in the Leicestershire Road Racing League (LRRL). First place for the ladies went to Gill McGarry. Sarah McSharry came in second and third place was awarded to Kate Perkins. The Men’s first place was awarded to Chris Limmer. Edward Batch was awarded second place with third place going to Jonathan Strong.

LRRL rep Sarah Garford presented the following LRRL trophies to club members:
100% attendance in the league was awarded to Kate Perkins, Sarah McSharry and Gill McGarry. As a result of the ladies teams winning division 1 and 2, Penny Masser, Katy Grainger, Kate Perkins and Sarah McSharry from the ladies A team were presented with trophies for gaining the most points within the team. The ladies B team trophies went to Gill McGarry, Odette Foxall, Jenny Green and Sarah Garford.

Men’s captain Jonathan Strong and ladies captain Andrea Earley then went on to present the club’s Times Standard Awards. Runners can gain an award by completing 5 different race distances within the times set by the standards. A distinction can be achieved by completing all 9 distances within the scheme which must include a marathon and a 20 mile race.Bronze Awards were presented to Rolf Hoelmer, Kate Perkins, Kev Higham, Jonathan Strong, Andrea Earley, Rachel Hallett, Steven Penney, Rachel Southworth, Tom Wormleighton, Julia Waite, Ed Nixon, Céline Guéry and Jacqui Campbell. Bronze Distinctions were presented to Ed Batch, Leanne Byard and Jenny Green.

Sarah McSharry scooped the Ladies Runner of the Year presented by last years winner Kate Perkins. The award is voted for by fellow club members who were inspired by Sarah after going from strength to strength in 2014 after jumping from achieving Bronze times to Gold times in less than 12 months and shaving over 30 minutes off her marathon PB.

Last years male Runner of the year Jonathan Strong presented Joint winners Ed Nixon and Geoff Oliver with this years shield. Ed has progressed at an outstanding rate since joining the club and his strongest year yet was duly noted by fellow club members, ending with a sub 4-hour first marathon. Geoff is a long standing inspiration to club members but 2014 saw him achieving 8 world records in one race for the over 80’s and his determination to return this year is a further inspiration.

Club Secretary Paul Clayton and Chairman John Padbury presented the penultimate Lifetime Achievement Award to Penny Masser and Steve Hatcher which includes lifetime membership. Both individuals have been club members for over 20 years and have made significant contributions to the club. Penny has been an excellent ambassador for the club at races throughout her membership and has held the post of Club Secretary. Penny has also been an integral part to organising Thursday evening running routes throughout her time at the club. Steve has been Men’s captain, Head Coach and XC captain which includes organising the clubs annual XC race. Steve has also spent many voluntary hours travelling far and wide to provide support to club members during training, races and endurance events, assisting on his bike and putting up tents whatever the weather.

The club would also like to congratulate member Rachel Hallett for running her 100th park run on Saturday and being the first club member to reach this milestone. Hinckley Running club meet on Tuesdays and Thursdays at 6:15pm outside the Small Hall in Hinckley Leisure Centre. For more information contact Paul Clayton on Secretary@hinckleyrunningclub.com or visit www.hinckleyrunningclub.com. The junior athletics division has grown to 108 members and train at Green Towers every Wednesday from 4.45 – 5.45pm and welcomes young aspiring runners and athletes of all abilities. For more information contact Andy Lauder on andy_lauder@btconnect.com