Last Sunday saw the final LRRL league race for this season. A great turn out again with the men out numbering the ladies for once (18 men, 16 ladies) with 34 runners, the most for the summer league races in 2015. Thanks as always to everyone who took part either by running or supporting (and/or baking cake).

Below is a list of the HRC runners who have completed 100% of the LRRL winter and summer races this season. This is a massive achievement, something I tried to complete this year along with Sally. Simply fitting them in around other commitments isn’t easy. Then there are clashes with other events, either on the same day, or the day before. That’s before you factor in injury preventing you being able to take part, or the traffic that prevented Sir Ed from making the Hungarton 7 race after work on a Wednesday evening.

A special mention to Ben Masser, who is the youngest person to ever complete 100% of the league races, this year being the first time he could run some of the races over 10k. With JF10 being the furthest distance Ben has ever raced, he did amazingly well with a time of 1:07:18.

Many other great performances on Sunday, including many PBs. Joe Langham had a great run again and good to have more Langham’s on at HRC this year. Runner of the day for the men goes to Tom Wormleighton, Tom has continually improved on his good performance last year over the many races he has taken part in so far this year.

For the ladies, Sarah Garford managed a 10 minute PB (paced by Sir Ed?), another 10 minute PB next year (both?)? Sally Henderson managed a PB based on it being her first 10 mile race, but also a good time for the distance and completing her 100% showing this year coming back from injury she has bounced back stronger than before. Runner of the day goes to Penny Masser, another Gold time for Penny (Diamond next year?), she has been constantly knocking out great times. 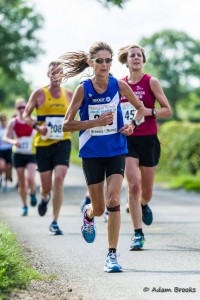