The Leicestershire Road Running League (LRRL) 2017 Winter season has come to a close and the individuals results are in.

The individuals prizes are worked out using the best three results of the four winter races – Kibworth 6, Stilton 7, Markfield 10k and Desford 5. 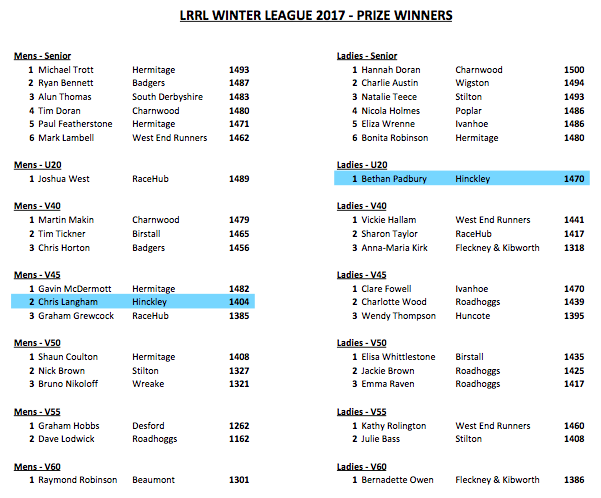 Those nine might be well placed with a shot at the HRC Presidents’s Shield award this year – awarded to the best age-graded total score across the whole LRRL Winter and Summer seasons.

Five members ran their first ever LRRL race: Kerry Wittering, Emma Thompson, Nicola Dutton, Steph Harris and Will Trollope. Thanks for being brave enough to come out for your first race, hope you enjoyed it. Hopefully we will see lots more new names by the end of the year – if you haven’t, go on give it a try! I have put the race dates below.

In the club side of things, we have managed to have full men’s team (first 8) and ladies’ team (first 6) for every race. Hinckley men are 4th in Division One. The ladies are 8th in Division One, in the relegation zone alongside Barrow, but only only a few points in it. The club league runs across the whole winter and summer season though so still 7 races to go.

First summer league race is the West End 8 on May 7th, hope to see you there!

All races open to all, the more the merrier!