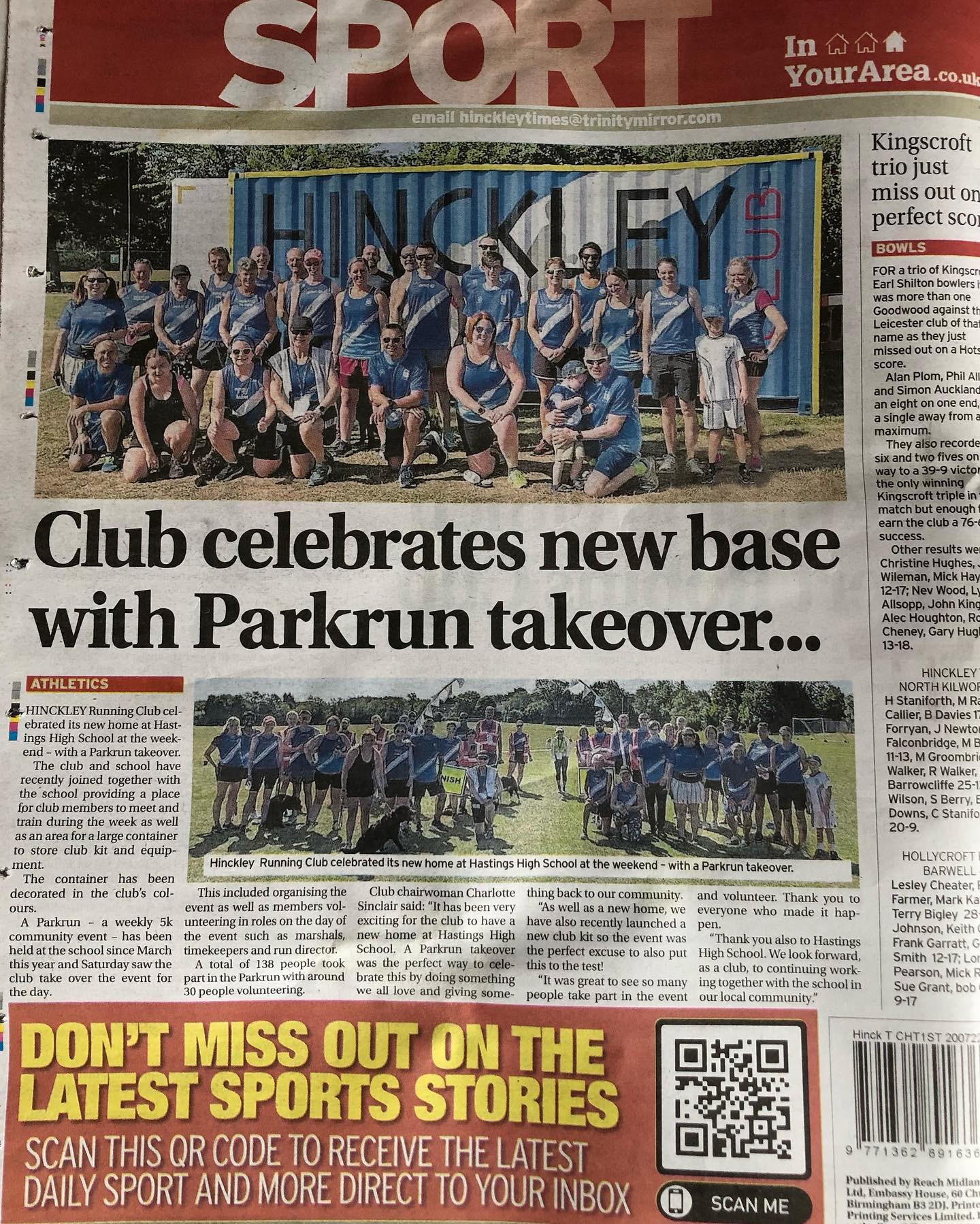 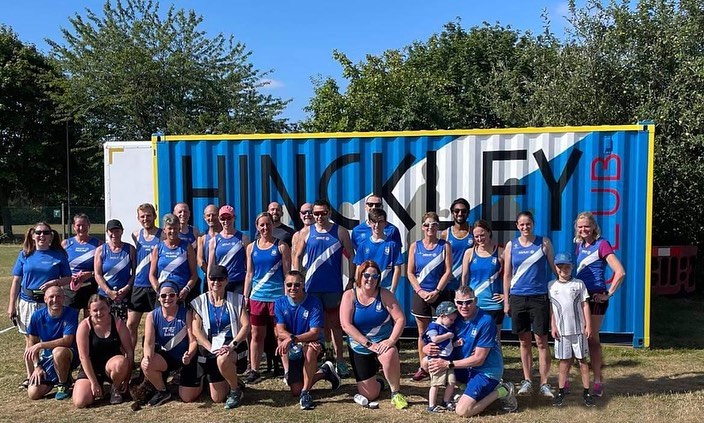 Hinckley Running Club celebrated its new home at Hastings High School yesterday – with a Parkrun takeover 😎The club and school have recently joined together with the school providing a place for club members to meet and train during the week as well as an area for a large container to store club kit and equipment.The container has been decorated in the club’s colours.A Parkrun – a weekly 5k community event – has been held at the school since March this year and Saturday saw the club take over the event for the day. This included organising the event as well as members volunteering in roles on the day of the event such as marshals, timekeepers and run director.A total of 138 people took part in the Parkrun with around 30 people volunteering.Club chairwoman Charlotte Sinclair said: “It has been very exciting for the club to have a new home at Hastings High School. A Parkrun takeover was the perfect way to celebrate this by doing something we all love and giving something back to our community.“As well as a new home, we have also recently launched a new club kit so the event was the perfect excuse to also put this to the test!“It was great to see so many people take part in the event and volunteer. Thank you to everyone who made this happen.“Thank you also to Hastings High School. We look forward, as a club, to continuing working together with the school in our local community.” 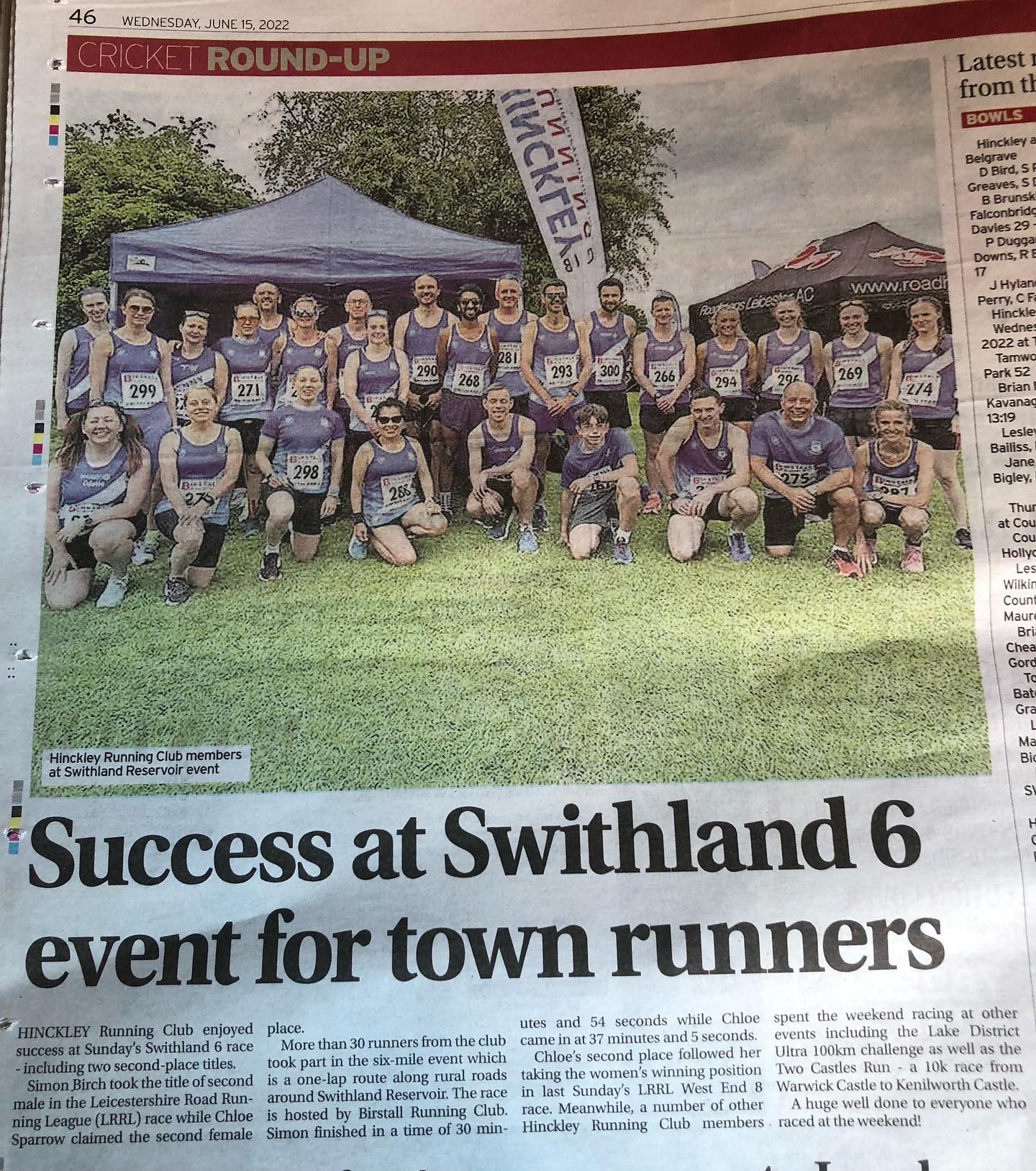 Another week, another appearance in the Hinckley Times! Well done all 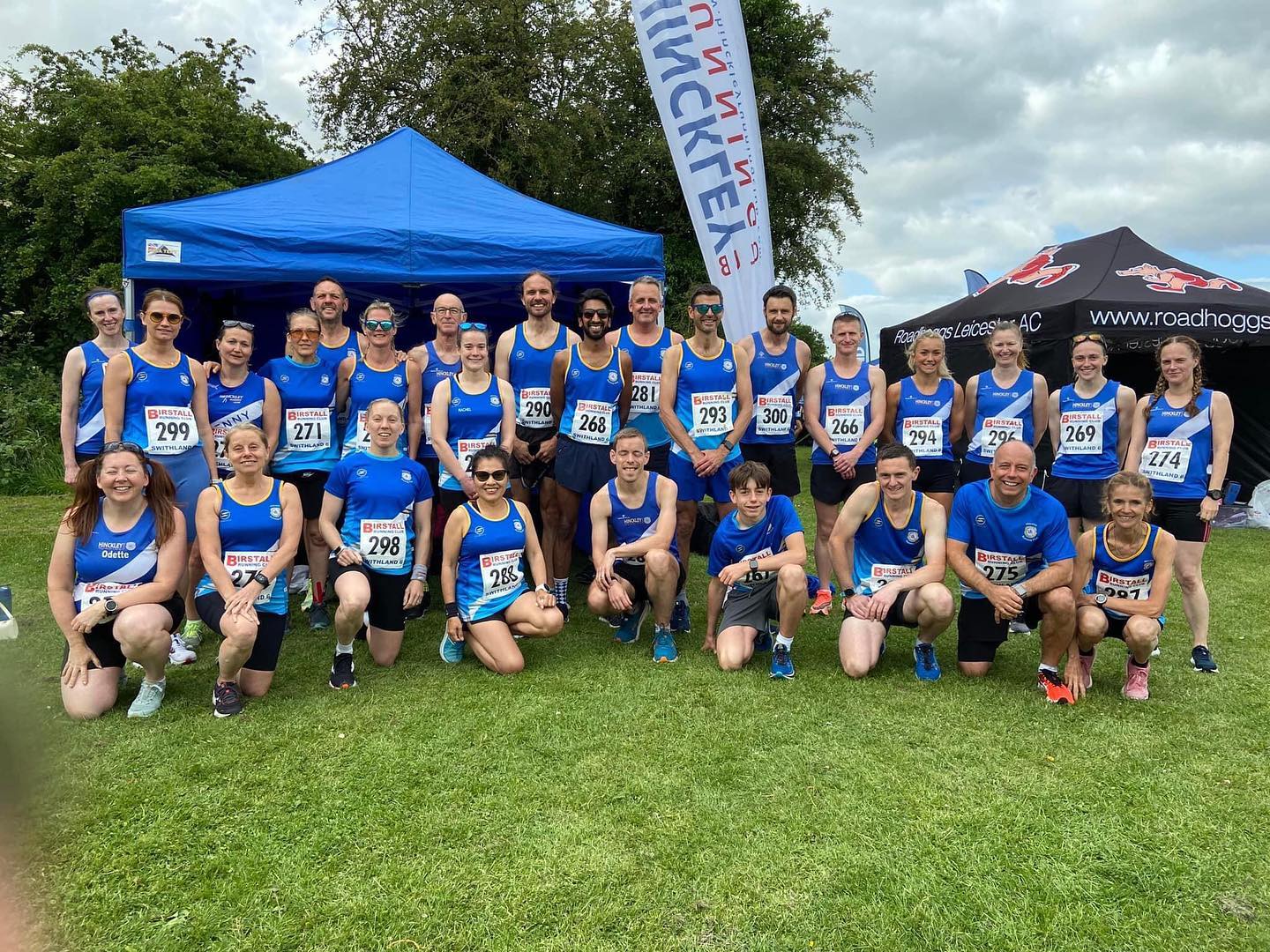 A Monday evening shout out to our runners who raced at yesterday’s Swithland 6 race More than 30 of our members took part in the six-mile Leicestershire Road Running League event which was organised by Birstall Running Club.A big congratulations to our two members who took second-place titles at the race🥈Simon Birch took the title of second male in a time of 30 minutes and 54 seconds while Chloe Sparrow claimed the second female place with a time of 37 minutes and 5 seconds.Chloe’s second place followed her taking the women’s winning position in last Sunday’s LRRL West End 8 race. Congratulations also to our members who spent the weekend racing at other events including the Lake District Ultra 100km challenge as well as the Two Castles Run – a 10k race from Warwick Castle to Kenilworth Castle! And, as always, a big thank you from us to everyone involved in organising and supporting these events for us all to enjoy! Team HRC 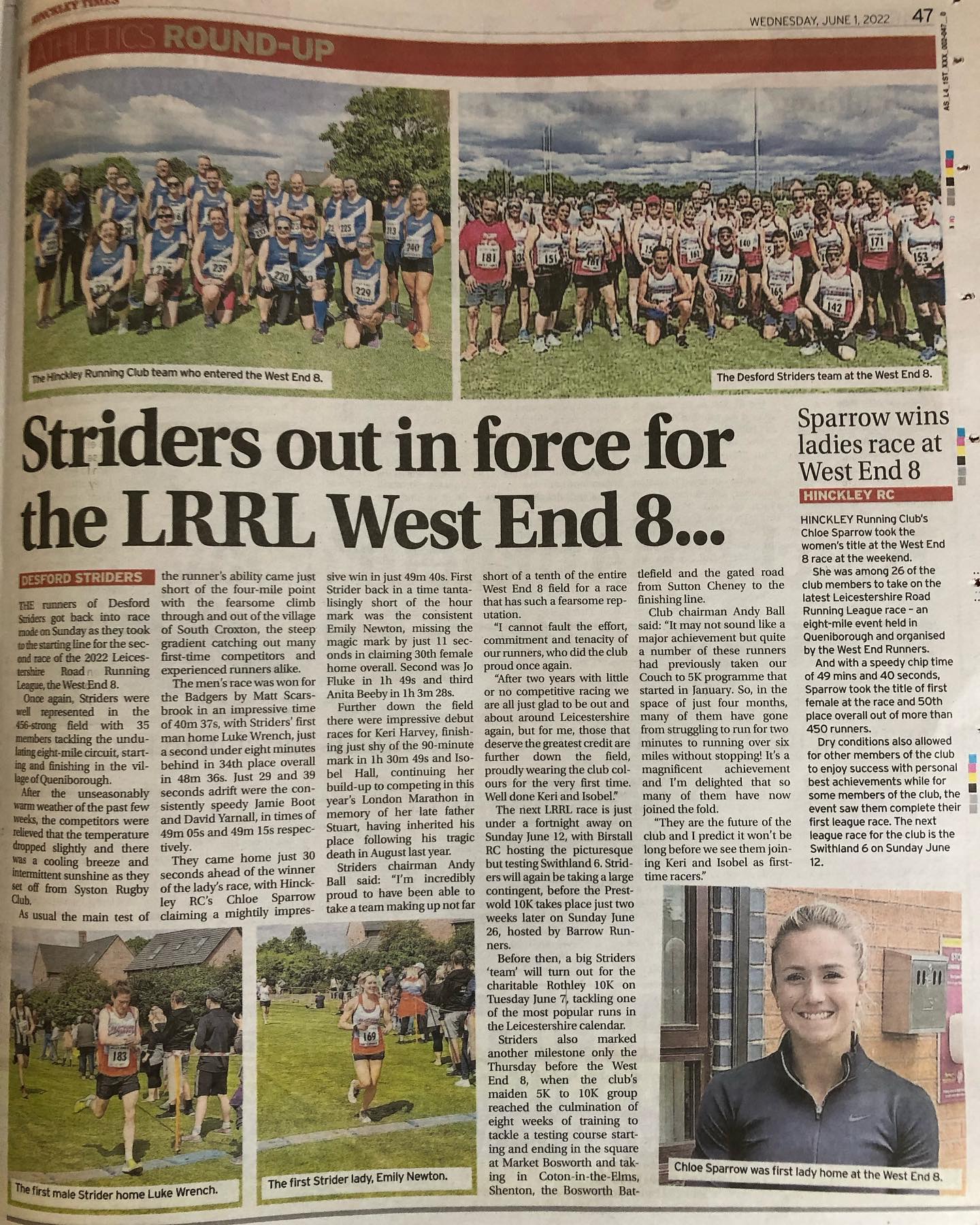 A huge shout out to our members who took part in yesterday’s West End 8 – including our very own Chloe Sparrow who took the title of first female. 🥇Chloe was among 26 of the club members to take on the race and a speedy chip time of 49 mins and 40 seconds, saw her take the title of first female at the race and 50th place overall out of more than 450 runners!And there was success for other members of the club too with PBs while for some members of the club, the event saw them complete their first league race.A huge well done to everyone!!

The club put on three speed sessions which were held at safe locations and limited to 11 members each plus a coach.

This came following a number of meetings held by the HRC committee to ensure a safe return for all. A club member has also volunteered to act as our COVID-19 co-ordinator.

All members have also been directed to guidelines and advice to help keep themselves and others safe. This includes following a booking system to attend a session, social distancing at sessions and carrying hand sanitiser. Risk assessments were also carried out in relation to each session.

The club will look to continue holding three speed sessions every Tuesday at this stage.

Some members of the club have chosen to continue with their own training groups instead of returning to sessions which the club also very much supports.

Thank you so much to our committee, our coaches and our COVID-19 co-ordinator for all their efforts to allow last night to happen!

A bit of news on how Hinckley Running Club has been staying “together” while staying apart during the lockdown.

With a lockdown in place, members of Hinckley Running Club have been finding other ways to keep busy “together” – while staying apart. When training sessions and team runs were cancelled in line with the Government guidelines, the club decided to look at other ways to keep everyone connected, motivated and involved. And from solo running challenges and home workout videos to daily social media posts and quizzes, members have certainly been kept entertained!

Activities, which have been done through the club’s private Facebook page, include:
⭐️ Daily social media posts where members can share their exercise plans for the day. The posts also include a different question each day with examples including asking members to share their worst running picture, their favourite cake and the first three things they will do when lockdown is lifted
⭐️ A weekly speed session workout set by coaches which members can complete solo anywhere at any time
⭐️ A nurkrap challenge – an alternative to parkrun for members to do solo
⭐️ A road sign challenge – where members are asked to spell a word out with street signs while out on their run
⭐️ A scavenger hunt challenge – where members are asked to answer 30 questions relating to specific locations while out on their runs. These can be done in any order at any time and across different runs
⭐️ A President’s Quiz which has been done through Facebook Live. Three have been held so far
⭐️ A kettlebells home workout class through Facebook Live led by club treasurer Odette Foxall. Around three virtual classes have been held each week

The club also has mental health ambassadors who encourage members to talk about their thoughts, feelings and concerns.

Club chairwoman Charlotte Sinclair said: “It has been extremely important for us all to stay home and save lives during the lockdown period meaning our running club sessions and meet ups were immediately cancelled.
“But we were also very conscious that we wanted to keep our club members connected while being separated.
“These activities, which have involved members of all ages in our club, mean we have all been able to feel like we are together while adhering to the Government guidelines.
“The efforts everyone has put into this has been absolutely superb and feedback from club members has been fantastic.
“It truly has shown our Hinckley Running Club family at its best!”

Regrettably we have taken the decision to cancel Sunday’s XC at Bosworth Battlefield.

Whilst the course is just about runnable, the field we use to park the majority of the cars in is saturated – with more rain forecast later in the week and the fact that it is on an incline mean that we cannot safely park cars on there.

In addition, both roads to the Battlefield Centre are flooded – just outside Sutton Cheney fully to a depth that smaller cars can only just get through – this has been the case for several days now, and also extensively around the railway bridge near Sutton Cheney Station.

The organisers have discussed extensively and we feel that we have no option but to cancel for safety reasons.

We are obviously gutted to have to cancel as not only have the team put in a lot of work in planning/course clearing, we are also aware of how popular the race is. 😢