The Leicestershire Road Running League (LRRL) dates for 2019 have been announced. See LRRL 2019.

Last Sunday’s John Fraser 10 race saw the end of the 2018 season of the Leicestershire Road Running League. The results have been counted and verified and here they are. (You can find the full results of every race on our own results page, and the final league tables in detail are on the LRAN website.)

First of all lets look at the season’s races and how many Hinckley runners completed each one:

Mixed League (4+4 to count): New for this season is the mixed league, in which a team comprises is the first 4 men and 4 women at each race. Hinckley has begun in Division 1 and came 6th out of 8 so will stay up for next season. (Champions: West End Runners)

Womens League (6 to count): Hinckley women came a respectable 4th out of 8 in Division 1, so staying up for another year. (Champions: West End Runners)

Mens League (8 to count): Alas, the men ended bottom in Division One and so back down to Div 2 next year after two heady seasons in the top flight. (Champions: Badgers)

Vet Womens League (3 to count): Finished narrowly bottom of Division 2 so will be down to Div 3 next season. (Champions: Huncote Harriers)

Vet Mens League (4 to count): Saving the day, the vet men finished the year champions of Division 3 and are promoted to Div 2 next year. (Champions: Hermitage Harriers)

In the individuals standings, the best 6 of the 9 races are counted. The Hinckley runners completing 6 or more races were:

In all, 75 of our club’s members took part this year with 27 first timers (the number of races in brackets, and in bold are those who took part in an LRRL race for the first time):

For the second year running, Liz has earned the 100% award. This will be proudly presented at the club awards night in early 2019.

Kate’s 7th place means she only just missed out on an award from the league (which go to the top 6 seniors and top 3 in each vets age category).

Unfortunately the LRRL does not have an 80+ category but if there was I suspect the winner might be Geoff Oliver.

Finally a special mention to Simon Birch who achieved the race win at the John Fraser 10, which also makes him 10 Mile Leicestershire county champion.

Don’t forget as well the HRC Presidents Shield which is awarded to best performing male and female runner (age graded) …… which our LRRL rep Mr Langham will reveal at a later date!

Congratulations from Hinckley RC to this years overall individual champions Tom Whitmore (Charnwood AC) and Joanna Male (West End), and big thanks to all the organising clubs, the marshals and officials, the LRRL committee and everyone who made it all possible.

Thank you to all the HRC members who represented the club this season, and to all those who came along to support and take photos. I hope you enjoyed it and will be back for more next year. Now on with the cross country season!

– Nick Moore, Mens Captain (bleary eyed with spreadsheets; if I have made any mistakes or missed anyone out, please let me know)

Entries for the Hermitage Harriers Carl Rutt Memorial 10k will open at 8:30pm on Thursday 14th June . This will be the 8th race of the 2018 LRRL season.

The re-arranged Kibworth 6 LRRL race is on 27th May.

IMPORTANT: If you have your race number from either Stilton 7 or Desford 5 you will need to bring it with you again for this one. (This being a “closed” race we are using our own set of numbers and chips.)

Race is full and places can be swapped until 20th May via https://www.evententry.co.uk/kibworth-6

This is the original info from the organisers from March:
https://www.hinckleyrunningclub.com/wp-content/uploads/2018/02/Kibworth-6-clubs-doc.pdf

The Prestwold 10k will be on Sunday 24th June – it will be the 6th LRRL league race! Entries for this race open this Snday night, 29th April at 7:30pm at the following link:
https://www.evententry.co.uk/prestwold-10k
More info: https://www.barrowrunners.co.uk/prestwold

Entries will open 8:30pm on this Tuesday, 10th April. Entry link is: https://www.evententry.co.uk/birstall-running-club-swithland-6

This will be the 5th LRRL league race of the season. A popular and very nice 6 mile course. Hope to see another great turnout, all members of the club invited and encouraged to enter. The limit is 750 entries. 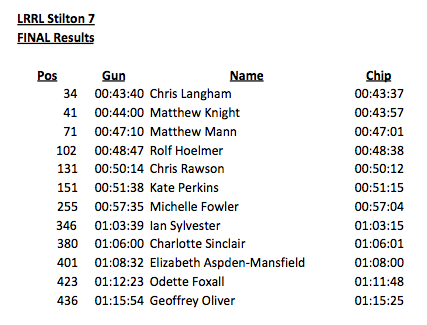 To car share for the race, meet from 9am at the old leisure centre car park (Trinity Vicarage Lane LE10 0BU) for setting off by 9:15.

For those who have not done one of our car shares before, parking is free all day on Sundays so you can leave your own car there.
If you don’t have a car it’s OK just pop along, there are always plenty of spaces and someone will be happy to get you to the race and back.

ALSO Bike ride courtesy of Stephen Penney… there is a group going to meet at 8.50am and leave at 9.00am from the old leisure centre car park calling by Barwell centre at 9.15am. Everyone is welcome to join in…

Here is the race info for the upcoming XC race at Bosworth Battlefield Visitor Center on Sunday 11th March:

This is the last race of the 2017/18 season and is hosted by Hinckley Running Club. League prizes will be give out after the race at the Plough Inn, Hinckley. Full details in the PDF.

It would be really nice to have a big HRC turnout and it would be great to see lots of the newer members of the club giving it a try. The race is only £6 and is 5 miles on quiet country roads, a great course.

These races usually sell out quickly so set a reminder on your calendar to be at your phone or computer at 8:30pm on Thursday!

It is the 3rd race in this year’s LRRL league.

Online entries to the Kibworth 6 (Sun 4th March) will open at 8:30pm on Monday 5th Feb.